The Renaissance in Jewellery for Men 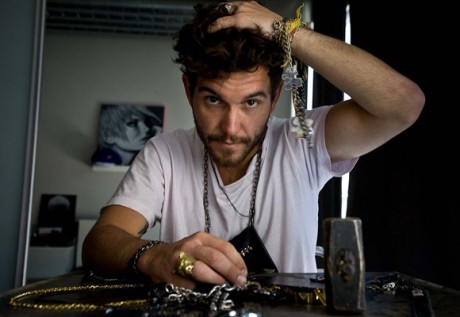 Jewellery for men has a long and fascinating history, from the early dawn of body adornment to the swagger and weight of the chains and gems which would festoon the likes of King Henry VIII or the Sun King of France. These were men not afraid to show their wealth about their person. Way back in the mists of time, when Homer wrote the Iliad, the blacksmith Hephaistos boasted of the intricate things he crafted, such as pins for cloaks, clasps and necklaces.

But the last two hundred years or so, such displays have been thought to be very vulgar indeed. A true gentleman would only ever wear cufflinks, a good watch and maybe a signet or wedding ring. “Medallion men” were to be laughed at. Now there is another sea-change on its way. The social acceptability of wearing wristbands has rocketed, and even royalty are seen to sport them. This has extended to men wearing friendship bracelets. Rock stars have always been exceptions to every rule, but now the famous skull ring worn by Keith Richards of the Rolling Stones is much copied and admired. Jeweller to the elite Theo Fennell does a line in skull rings which have branched out into a new line called Heroes and Villains. He features the faces of Gandhi, Lincoln and Mao on them. The stars of the hip-hop and rap scenes have brought masculine love of look-at-me jewellery right back into the spotlight.

Perhaps the most noticeable new trend is in men wearing necklaces. Celebrity chef Hugh Fearnley-Whittingstall, for example, is often seen with a thong around his neck featuring a masculine-looking arrowhead. Earrings are also becoming more common, although it is not yet commonplace. It would be unusual, for example, to see a BBC male newsreader wearing earrings, although not a sports commentator or a quiz show host or comedian.

History always comes in waves and people do tend to follow the trend. When it was all the rage to wear a powdered wig, you would look a bit silly without one. Now it is becoming easier for shy or squeamish men to adopt a bit of jewellery if they want to. It is, however, difficult to know just how far to go, having had such a long era of discretion and low-key male ornament. One rule it follow is to never wear anything that makes you feel uncomfortable. If items add to confidence and feelings of self-esteem, then they are doing a great job. Another trend is that men still favour wearing jewellery to dress down rather than to dress up. Jewellery that looks old, weathered and possibly inherited is always popular. Shiny and bright jewellery still belongs to the rock-star world.

Men enjoy jewellery for all the same reasons women do. It can make them look and feel better, more composed and more elegant. It shows one has made an effort. It can add value and allure to overall appearance. The fact that men are free to experiment more with their jewellery options is really rather an exciting development in recent times.